A Day At The Albuquerque Balloon Fiesta

What is a morning at the Albuqurque Balloon Fiesta Like?

Imagine being surrounded by floating mammoth-sized lollipops in a riot of colors against a backdrop of a powder-blue New Mexico sky. Your eyes light up as the spectacle of color and shape unfolds before you. No matter how old you may be, this is sure to bring out your inner-child. You are not dreaming!

This is the Albuquerque International Balloon Fiesta. You are standing with tens of thousands of spectators, tiny-as-ants, in a park the size of 54 football fields, watching the show of shows. It starts in the pre-sunrise darkness with the Dawn Patrol and finishes with a riotous flurry of colorful orbs ascending into powder blue skies just over your head. Welcome to the most photogenic event in the world!

From Humble Beginnings to International Fame

The Albuquerque Balloon Fiesta began in 1972 at the Coronado Shopping Mall with only 13 balloons who participated in a balloon chase. One hot-air balloon would ascend, and the others would chase it. By the year 2000, the Fiesta was hosting 750 balloons with hundreds more seeking to participate.

The focus of the Balloon Fiesta shifted from being a championship balloon race to a fun event where a mass ascension of hundreds of colorful balloons delights spectators who share the field. With the addition of live music events and hundreds of vendors, it has taken on a colorful carnival-like atmosphere.

Balloon Fiesta Park, the permanent home of the Fiesta, fills every autumn with more than 100,000 spectators taking advantage of the ‘holy grail’ of balloon-riding weather known as the “Albuquerque Box.” These are wind conditions that are ideal for ballooning in Albuquerque. The “box” is a set of very predictable wind patterns that can be used to navigate the balloons — at low elevations, the winds tend to be southerly (from the south), but at higher elevations, they tend to be northerly. The effect is that the balloons can literally be flown in a wide arching circle around Balloon Fiesta Park, keeping them in view of the spectators. It is also ideal for the balloon races and competitions that are held as part of the event. 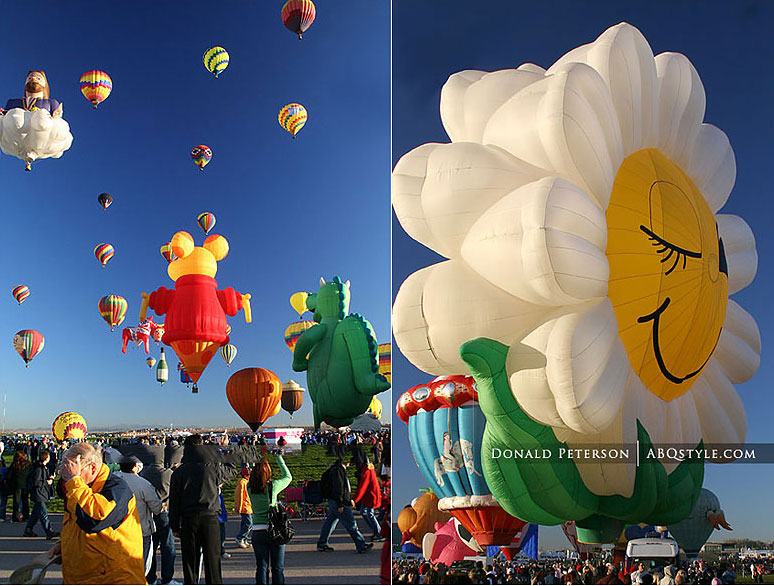 Balloonists use these winds to navigate in a vertical box — allowing the balloon to take off and land in almost exactly the same spot. Balloon pilots do not have a way to steer their hot air balloons. While they can control where the balloon flies vertically (by heating the air in the balloon to go higher), they rely on the wind to determine their direction.

Be There Early to Catch All the Fun!

Early October mornings before sunrise can be chilly in Albuquerque. Wear a couple of removable layers to keep warm until the sun rises. Be sure to have an early wake-up call to catch the start of the Fiesta day. At 5:45 am, the day begins with Dawn Patrol. Dozens of pre-dawn balloons light up the night air as they start the day’s events. This is a great time to grab a tasty breakfast burrito and coffee from one of the many food vendors lining the balloon field. Dawn Patrol also has a practical purpose, allowing event coordinators to predict wind speeds and direction for the remainder of the day. After Dawn Patrol, things start to heat up and move quickly.

At about 7:15 am, the main event begins. Mass Ascension is a coordinated launching of all the hot-air balloons that continues to approximately 9:00 am. This is the big show! You can walk all across the field to cheer on the launch crews. Be sure to bring your camera. You are not just a spectator, you are a part of the celebration!

During mass ascensions, balloons launch in two well-coordinated waves. Launch directors, also known as “Zebras” because of their black-and-white-striped outfits, serve as traffic controllers, coordinating the launch so balloons leave the field in a safe and organized manner. Weather permitting, balloons begin to launch promptly about 7:15 am on all mass ascension days. Thursdays and Fridays feature the Special Shapes Rodeo when balloons shaped like cartoon characters, animals, and other creative shapes take center stage.  In every direction you look, the field is covered with balloons in various stages of inflation and flight.

The time seems to fly by as the Morning session comes to an end at about 9:00 am. At that point, all of the balloons have launched. You will see a number of balloons enjoying the “Albuquerque Box” and others return for landing. Now is a great time to explore Albuquerque and check out some of its legendary restaurants for a late breakfast!

The Evening Sessions at the Balloon Fiesta

If you yearn for more excitement, you will want to return to Balloon Fiesta Park in time for the Balloon Glow and AfterGlow fireworks events that start at around 5:45 pm. During Balloon Glow, all of the balloons fire their propane burners and light up at the same time. It is a dramatic display set against the last light of the sunset sky. The AfterGlow fireworks end the event at 8:00 pm with a dazzling display of light and sound. Awesome!

Be a Part of the Show!

You can walk right up to hot air balloons as they are prepared for flight by enthusiastic crews. If you want to get closer still, share in a balloon ride! Rainbow Ryders, the Balloon Fiesta’s official balloon riding service, offers hot-air balloon rides to visitors as part of the event. However, reservations are limited and must be made well in advance.

The Albuquerque International Balloon Fiesta is a dazzling show is not to be missed. Indeed, the entire city of Albuquerque shares in the festivities. Be sure to attend! It will be an unforgettable event.