The best of Route 66 in Albuquerque

You’re visiting Albuquerque and have one burning question! Where do I go to see the best of old Route 66? In this post, I will show you some of my favorite Route 66 goodies in Albuquerque. This is the good stuff!

While the history of Albuquerque extends back to the early 1700s, it really came into its own during the Route 66 era. During the late 1920s and early 1930s, Albuquerque became a vital southwestern hub for newly mobile America.

Not surprisingly, the remnants of Route 66 roadside architecture can be seen in many of the motels and eateries along Central Avenue. The east-west thoroughfare Central Avenue was part of U.S. Route 66 from 1937 until the highway’s decommissioning in 1985. It became Albuquerque’s commercial hub during the peak years of Route 66’s existence and remains so today.

While the Route 66 mystique is somewhat muted by the modern demands of commercial development, there remains much that makes this one of the most important stops along the old Mother Road.

Old Town, Albuquerque is a must-see destination on old Route 66 near the downtown district. It encompasses about ten blocks of historic adobe buildings including the San Felipe de Neri Church, the oldest building in the city (built in 1793). This church and its adjacent Plaza formed the nucleus for the city’s earliest settlers who built homes, shops and government offices in the surrounding community. Old Town looks much the same as it did in the early 1800s. Gift shops, art galleries, and restaurants now occupy the charming historic Pueblo Spanish style adobe buildings.

During the spring and summer months, it is not uncommon to see hot rods and lowriders parked around the Plaza in Old Town, adding a bit of Route 66 spice to Old Town. This is a great place to stroll and soak in the southwestern patina. There are plenty of restaurants in Old Town. This is also one of the best places in the city to buy souvenirs or gifts. This is a nice selection of hotels and motels located within walking distance of Old Town to fit every budget.

After you have seen Old Town, Albuquerque’s oldest district, take a short ride to Nob Hill, Albuquerque’s hippest district. It’s quirky, colorful and upscale, and arguably, the most visually appealing strip along Albuquerque’s old Route 66 (Central Ave.) Take a quick drive through it just to get your bearing. Now, park the car. Walk slowly and soak in the details. It’s chock full of hip boutiques, cafes, and bars.

This is an easy decision. You must stop at the 66 Diner at least once on your visit to Albuquerque. Why? Just look at it! This is one of the most beautiful modern interpretations of classic Route 66 roadside architecture you will find on the Mother Road. Just after sunset, its neon-style lighting looks awesome against the magenta tones of a softly lit sky. Bring a good appetite and your camera. Oh by the way, here’s another reason to stop by, the 66 Diner has great food!

The 66 Diner is located at 1405 Central Ave NE near the University of New Mexico campus. 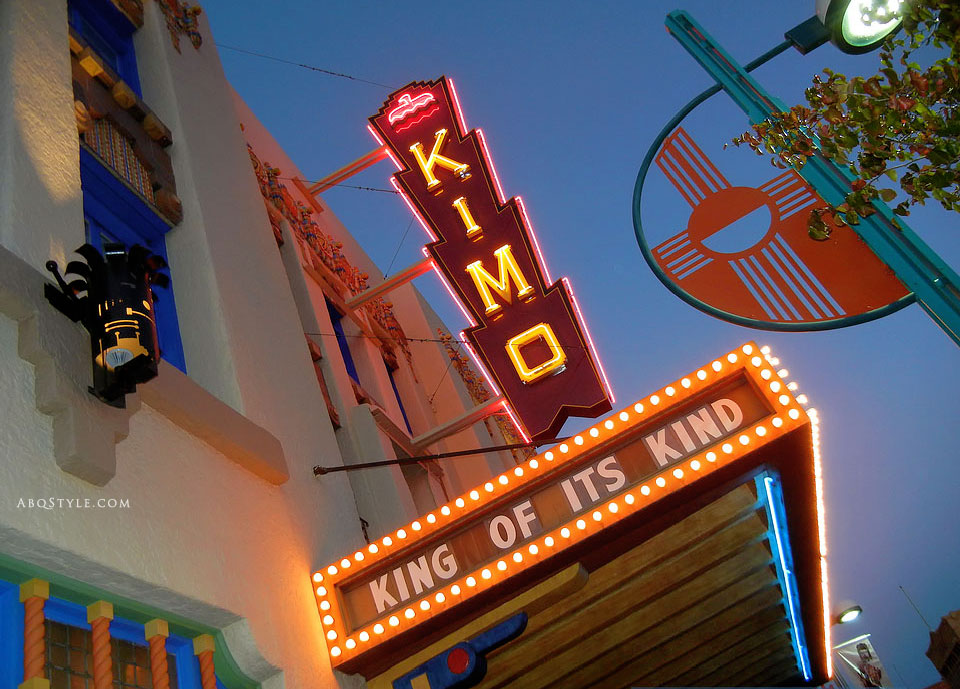 The KiMo Theater is one of the bright stars of the old Route 66 (Central Ave.) in downtown Albuquerque. The KiMo opened on September 19, 1927, as an ornate Pueblo Deco movie palace. Pueblo Deco merges visual influences from Native American cultures of the southwest with Art Deco. This style of design enjoyed a brief faddish period of popularity, appearing in a handful of theaters of that time. The KiMo is considered the best of the breed for this type of design.

Like the Mother Road, it has gone through periods of radiance, rust, and revival. After suffering declines, disrepair and fires over the years, the KiMo was purchased by the city of Albuquerque and enjoyed a $2 million restoration in 200.  Self-guided tours of the KiMo are available during weekday business hours or you can simply purchase a ticket to see a classic movie in this resplendent movie theater.

The KiMo is located at 421 Central Ave NW in the heart of downtown Albuquerque.

If you have one day to spend in Albuquerque and time for only one meal, this is where you go. The Frontier Restaurant is a diner/cafeteria style eatery with a slight Texan twang that offers a birds-eye view into Albuquerque culture. It offers some of the best New Mexican diner style chow on the old Route 66 in ABQ. But that’s only part of its charm. This is the single best place to take the pulse of Albuquerque. Everyone eats here. You get a thickly cut slice of all that is Albuquerque whether you’re here for breakfast, lunch or dinner. The Frontier is a tourist attraction in its own right. Plus, its one of the very few eateries that have late hours in Albuquerque.

This is cool! Reels and Wheels is a new public art installation in front of the  Hiland Theater on Route 66 (Central Ave.) in Albuquerque. It celebrates both the history of the Hiland Theater as a movie house from 1950 50 1995 and its Route 66 location. Plus, it serves as a bus shelter for the ABQ bus lines that run along Central Ave. The Hiland is now the home of the NDI – New Mexico Dance Program. Created by artist Howard Meehan, it is a playful and striking adornment for Albuquerque’s ‘Mother Road.’

The Hiland Theater is located at 4800 Central Ave SE in Albuquerque.

Call me crazy… but I just adore this charming building! The Floral Chapel on 3rd Street in the Barelas neighborhood in Albuquerque (4th Street was a part of Route 66 until 1937) was built in 1946 by Frank Salazar, the son of the Elfuego Salazar who began this mortuary business in 1918. It is an iconic example of Art Deco style merged with classic southwestern Adobe architecture. I had the privilege of receiving a tour of this fascinating complex by Louis Salazar before his retirement and sale of the property.

It has been updated by the new owners (as seen in the photo above) but I still love the original style before renovation seen in the photo below. This sits just three blocks from Central Ave (the old Route 6 on 3rd Street in downtown Albuquerque.

This post is a work in progress. Return soon for more highlights from Route 66 in Albuquerque, New Mexico!